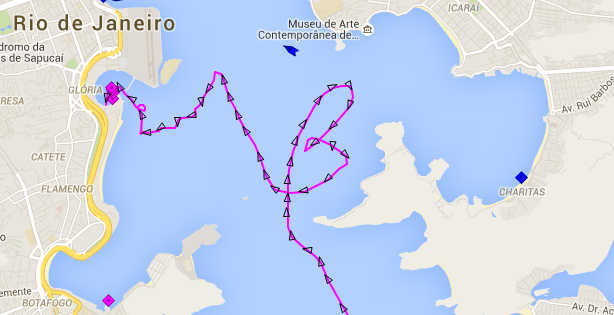 If you have been following the Race Viewer, then you will know that Ruth has arrived safely in Rio in 4th place after a closely-contested finish with Great Britain. Just 0.8 Nautical miles behind after almost 6,000 miles at sea.

She has no wi-fi in the Marina, so it may be a while before she can give her own update.

The loop to the West in the AIS track on the map is because they missed the marker for the finish line after avoiding a large ship, and the wash pushed them in the wrong direction. This meant a turn to cross the line properly.

While waiting for Ruth’s report, you can read another of her crew blogs (Race 1 Day 27) as they approached Rio.

Also, some pieces of video. They seem OK in a PC browser, but don’t work without the Periscope app on iPhones/iPads. Have not tried on an Android device.

DLD Arrive in the Marina at Rio