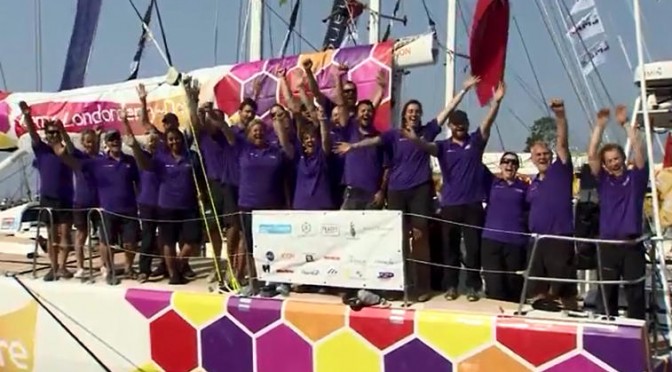 I had been building up to departure day for over 18 months. With the prep weeks and already living onboard, the week in London seemed to drag in some ways and fly by in others. I was ready to get going on this adventure but not ready to say my goodbyes. I’m so lucky to have friends and family supporting me in this endeavour and I wasn’t quite prepared for the emotions that went with this. Departure day came around and I left the yacht early to have one last shower and say goodbye to my Mum and Dad. All was good until the goodbye part, where the tears started to roll and pretty much remained with me on and off until we had left London behind us. Saying that, there was also a lot of excitement to go with it – parading as a crew and being introduced on stage, lots of waving and cheering too. There was a moment just before it was our turn to slip lines where my tears were rolling at such a rate I think many on my crew wondered who they were about to go to sea with! It was the waiting that was the hard part as it prolonged the departures and made you think about going into the unknown.

My “fan club” was out in force with 17 friends and family as well as 12 of my Brownies and leaders too. This meant I was being cheered by three different supporters’ boats which made the endless waving more fun! Big shout out to Sally for the awesome banner – thanks dude!

That evening we spent the night in Queenborough and it was an odd feeling. This was it, there was no turning back now.

Race start day came with a lot of rain! There were many more supporters on Southend pier despite the bad visibility and weather it didn’t seem to dampen their spirits. We were getting ready to cross the line and the count down began – before you knew it, it was time and we had crossed the line. It wasn’t the dramatic start I had imagined after the excitement of the Thames wave off as when fully involved with sailing you don’t even notice you’ve crossed the line! Daniel however had us in a great position and we were leading the fleet under spinnaker – now that was awesome!

Sailing under spinnaker is both exciting and terrifying at the same time. The spinnaker sail is massive and flies at the front of the yacht and used for downwind sailing. It is exciting as when filled with wind you fly along and can feel the pace. What’s terrifying is that there is a small margin for error with helming and trim before things can come crashing to a halt and damage to the sail and rig can happen. We unfortunately managed to tear our code 1, the largest of the spinnaker sails, when taking it down. This meant for the next 5 days we couldn’t use this sail as the teams worked day and night to repair the tears.

Spinnakers (when not broken!) are the order of the day for this leg and we managed to sail almost all the way to the doldrums flying one which is pretty impressive. This has also meant I’ve been able to learn more about this sail, how to trim it and helm when they are flying. I hope that this will stand me in good stead for the legs to come as we have had a varied amount of wind strengths to get to grips with. Top speed this leg has been a whopping 20knots!

Ocean racing is hard, I knew this before embarking on this journey but I’m not sure I was quite ready for the feeling of EVERY muscle in my body hurting. There are parts of me hurting that I didn’t even know existed. I just hope that there is a point when ocean racing becomes ‘normal’ and some of the pains go away. At least I know I’m working hard!

We received the sad news that a member of the Ichorcoal crew, Andrew Ashman, had tragically died in an accident onboard. This was a shock and stunned us all. You are aware that ocean racing is a dangerous thing, however you hope that this isn’t something you encounter. Lots of ‘what ifs’ came to mind and for a time I was truly stunned. We talked a lot about the crew member as a watch as some knew him from trainings and preparations. In many ways it didn’t matter if we had met him or not as he was one of us, one of the Clipper family and therefore a great loss to us all. He will remain with us through out the rest of the Clipper journey and I hope he is a shinning star looking down on us.

The sea and the elements can be a mighty force but also a great joy. Being at sea gives you a new perspective on the world and on life. We are but a small piece in such a vast world and by sailing get to experience great things others don’t. For example, I’m never going to get tired of seeing groups of Dolphins playing around us, sunsets and sunrises that stretch as far as the eye can see and so many stars at night your eyes hurt looking up at them all. These are the things that help lift you when you’re down and remind you why you are here. We have even been treated to a humpback whale who popped up right by our starboard side to say hello. There are some creatures however that I’m less glad to have close encounters with. Flying fish. They are an amazing sight to behold during the day when you see them pop out the sea and fly over the waves. Once darkness has fallen, they become deadly missiles that like to try and cause trouble to those on deck by hurling themselves like missiles at you. They then flap about on the deck letting off a terrible stench! I have received 4 direct hits so far, including one to the face which was particularly unpleasant and one even tried to attack me while sleeping in my bunk by coming through the hatch!

We have been particularly lucky with the weather being warm and dry. However this brings new challenges to living in close confinement onboard a 70ft yacht. What the clipper brochure doesn’t sell you is the spa experience. Who knew that even in Ocean racing you can have a sauna followed by a sea salt scrub? Yes, readers you guessed it, we have been hot, hot, hot. Go to your bed to rest, waking up in a pool of your own sweat followed by watch on deck in the sweltering heat. Needless to say the cockpit deck wash with the fire hose was sabotaged and turned into a team deck wash! We were all dreading getting to the Doldrums, renowned for lack of wind and sweltering heat, as we had been experiencing this way before we reached this area.

We edged closer to the Doldrums and the wind disappeared which meant at times we had a boat speed of 0kts! Because of previous Doldrums experiences, Clipper introduced a new rule which means that each team can motor sail for 60 hours over a set latitude for 6 degrees. Teams have to declare when this was to happen a set number of hours before the engine went on. Because of the lack of wind, we declared so motoring could commence at the earliest chance. What we weren’t banking on however was that as soon as we reached this point, there was a lot of wind on the nose! This meant we spent nearly all of the 60 hours bashing into waves and with heavy rain showers thus meaning there was to be no dinghy paddling pool or sunbathing to be done!

Just before we got to the equator we had a message from Neptune to say he would be visiting and that everyone needed to prepare some entertainment for him to be able to go from polliwog to shellback. I decided to change the words to a song and make it about king Neptune! I was rather worried about what was in store for us seeing as the shellbacks amongst the crew had been saying things like they were keeping flying fish and other bad smelling things for the ceremony… We actually crossed the equator in the early hours of the morning so Neptune decided not to come until later that day. Everyone had to give their offering to Neptune and depending on if he was entertained or not, the amount of ‘slop’ thrown over you was then given to enable the transition from polliwog to shellback! The mix stank but at least there wasn’t actually any fish in it! We then spent time together as a whole crew toasting Neptune with a party-like feel. It was nice to spend a prolonged period of time together as a whole crew as it gave us a chance to chat to those on the opposite watch which is something that doesn’t often happen as when we are up they sleep and vice-versa!

After a few thousand miles of down wind sailing, things were about to change as we needed to sail upwind to get to Rio. This meant adjusting to life at a 45 degree angle, which after the reasonably comfortable downwind sailing was a shock to the system! Everything is so much harder at this angle, from getting in and out of your bunk, to walking around deck or using the winches. Being on mother duty was so much harder too, as if you weren’t careful, the food you were chopping/pouring/passing would suddenly end up flying across the galley!

Ocean racing is a funny thing, although there were 5400Nm in the race, we ended up in a drag race to the finish with team Great Britain. I say drag race but we were both stuck in wind holes so it was a snails-pace race for a while and continually changing who was in the lead. Throughout the race we have been in various different places on the leaderboard and always close to Great Britain. Although they pipped us to the post for 3rd place, we have raced hard and come through the experience as a happy team. I hope we can build on what we have learnt and make it to the podium another time. I can’t believe it’s been a month and I’m now in Rio! I feel like the is my life now, I feel at home onboard and land is a daunting prospect! Now for some maintenance, a bit of sight-seeing and then on to the next leg!

Please keep the messages coming as it has been lovely to read what has been sent and means a lot to know that I have a band of support back home following my every move – in fact you all know more than us as we only get position updates every 6 hours!

Here is to the next part of this adventure.

[Hoping for some pictures soon – subject to wi-fi being available]