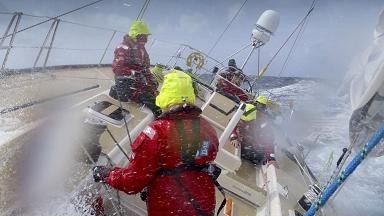 The Clipper Round the World Yacht Race comprises of 12 identical 70ft racing yachts covering 40,000 miles in eight legs of racing.

What sets this race apart from others is that of the 22 onboard each yacht, only the skipper is a professional and the remaining crew are all amateurs.

The crew contains about half ’round the worlders’ (like me) who will complete the circumnavigation of the globe and the rest of the crew is made up of those who join for a leg or two. As the race teams are ever changing it means that the team needs to work out its strengths early on so that the team can perform to its peak as every team wants to end up on the winners podium (and have I mentioned that I’m somewhat competitive!).

Although the ports for the start and end of each leg of the race won’t be announced until April 2015, the general route plan is already known.  The 2015/16 Clipper Race will  begin and end in the UK taking in South America, South Africa, Australia, Asia, West Coast America, Panama, East Coast America before returning to Europe and ended at the start port approximately 11 months later.  This is not a race for the faint hearted as the sea and wind will punish anyone who comes into contact with them. To view videos of what this experience will be like, visit the official Clipper Race Youtube channel.